I know it hurts right now,
But there’s never been a problem so complex we couldn’t figure out
Or been a time so frozen still we couldn’t wait it out,
Or a word so painful you could never let it out your mouth.

And it’s okay to cry,
There’s never been a watershed so wet you couldn’t dry your eyes
Or been a dark so heavyset the sun refused to rise
Even after love so close you thought it too strong for goodbyes

You’re allowed to be happy.
There’s never been a suffering you needed an amount of,
Or been a pain so absolute it couldn’t be healed from,
And I wish that I could promise someday would eventually come

But that’s not fair to say,
There’s never been sincerity exempt from a mistake
Or been a promise so assured it couldn’t possibly break
And I am not infallible, despite how confident I stay

If I could make you better,
I’d do it right away.
But there are no diseases I can cure with my embrace,
Or wounds that I can close with all the words I softly say,
Or history I can erase by putting smiles on my face.

If I could really fix you,
I’d have done it long ago.
But there are no words I can say to force you to keep hope
And I can’t make you believe things nobody can know,
Or send you down a better road if you don’t want to go.

All that I can really do is ask you to believe,
There is happiness out there for you even if it’s not with me.
There’s never been a distance so great you couldn’t try to run,
But I hope you never stop believing someday will eventually come.

Hey guys! I haven’t posted here in a while; I’ve been pretty busy with my NaNoWriMo project. I’m almost finished with that, and you can follow my progress here: http://nanowrimo.org/participants/crackedthesky/novels/novel-704342/stats

In the meantime, here’s a nowListening post I’ve been meaning to get to.

In this world of streaming music, digital downloads, physical copies becoming collector’s items, and bands touring nearly nonstop to compensate, it often feels like surprises are hard to come by. Still, now and then an artist finds a new way to shake things up, if even for a moment.

One of my favorite bands, Manchester Orchestra, did just that in September, when they suddenly and immediately released a new album called Hope.

Hope is a re-imagining of their previous album, Cope. Most of the songs are now quiet, stripped-down and acoustic, but Hope still has some curveballs to throw. Lyrically, some songs are word-for-word the same, and others have kept hardly anything intact. Musically, the songs are re-arranged, sometimes transposed to other instruments, shaken up and moved around, sometimes all but unrecognizable. 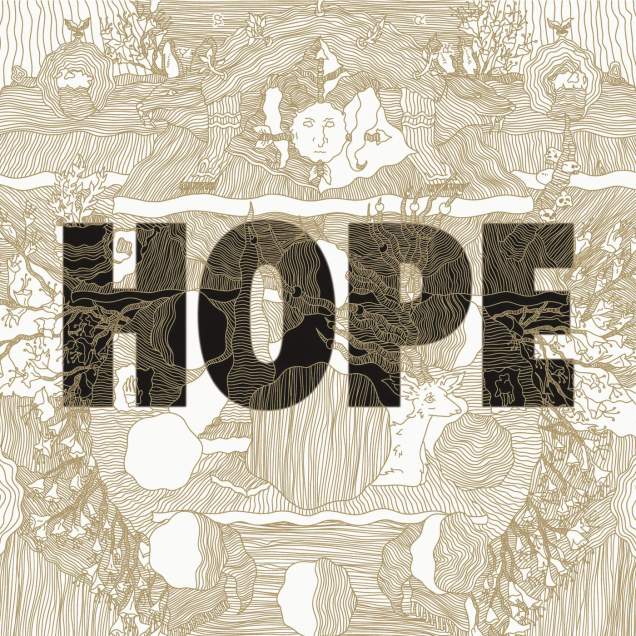 The cover art is a stark contrast to the simple black-and-white, text-only cover of Cope. At the time I criticized it, but in retrospect, it makes sense paired alongside Hope, and serves as an immediate admission that the two albums are going to be very different.

The songs appear in the same order with the same titles as on Cope, starting off with “Top Notch”. This was one of the heavier songs on Cope, but its Hope counterpart is an acoustic, palm-muted rendition of the song that sets the tone for the album to follow. The chorus, a once-shouted “All that I know, there’s no way to fix it” is instead melodically droned out, giving it a haunting, lingering vibe that carries the song to its close.

“Choose You” offers the first major lyrical diversion from Cope. In my post about that album, I mentioned this song had one of my favorite opening lines, and much to my surprise, the same rings true for Hope, even with the lyrics changed:

Following this is “Girl Harbor”. The Hope version is a slow, acoustic version of the song, and a bridge that was one of my favorite moments on all of Cope serves the same purpose on Hope, but with an entirely different sound. On Hope, Andy Hull reminds us that he can sing, with the accompanying music suddenly dropping to a single guitar while he belts out line after line, his voice confident and controlled as it wavers between notes.

“The Mansion” calms things down, remaining the sort of trippy, spaced-out rock song it was on Cope. Afterward is “The Ocean” which is almost unrecognizable; the lyrics haven’t changed, but the main guitar riffs are instead rendered on a piano while Andy Hull softly sings lines that were loud and explosive on Cope.

“Every Stone” echoes “The Ocean” with a keyboard replacing the main guitar, and continues the quieter tone Hope has carried for several tracks in a row. “All That I Really Wanted” shifts the focus back to the acoustic guitar and sticks with it through much of the song, while more layers of more instruments are added as the tune carries on, making it reminiscent of something from Andy Hull’s side project, Right Away Great Captain!

“Trees” is a darker song on both albums. There’s something creepy about it, but the Hope version dials this up all the way, even in the lyrics:

Pick from the bloodline tree,
It’s green with envy.
It’s okay to lose a limb
When they get too heavy.

Following this is “Indentions”. Probably the fastest-paced song on Hope, its main riff sounds like a palm-muted rendition of one that appears only briefly at the end of the Cope version. I always loved the riff on Cope, and I’m glad to see it come back so prominently on Hope.

“See It Again” diverges the most from its Cope counterpart. On Cope, the song is driven by heavy drum beats and palm-muted guitars during the verses while it explodes for each chorus, reflecting the frustration the narrator appears to be experiencing in the song’s lyrics. On Hope, there are no guitars or drums; there are no instruments at all. The song’s lyrics are almost entirely different, sung along to a vocal chorus, making the song into a shiver-inducing church hymn.

The album, like the one before it, closes with a song called “Cope”. This version is set to two clean electric guitars, reverberating each note and giving it a grungy, echo-y tone.

All in all, Hope is a beast of a different flavor. It’s experimental in its sound, delivery, and creation; Andy Hull said in an interview that the band had wanted to do an alternate recording of their previous album, Simple Math, but never found the time. I wouldn’t mind seeing them repeat the idea for future records, or even going back and doing the same for previous ones.