“Hole”, published as “A Sheltered Life” in Bewildering Stories, 2007. 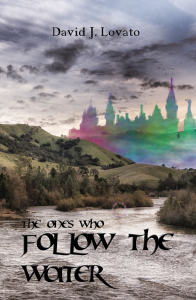 The town of Welby is surrounded by a high wall, erected in long-forgotten days when people remembered their magic and Immortals walked the earth.
Oren and Carah grew up together in Welby, but when Oren makes a mistake that could get Carah exiled, he has no choice but to climb over the wall and enter the unknown world beyond, following a river and looking for a necklace.
The world is full of creatures and people Oren never dreamed of, but friend and foe alike offer him the same advice: Don’t follow the water.
Oren’s journey leads him to an impossible castle, and inside, Oren finds the necklace, and a reason to never go back home.
Amazon • Apple iBooks • Barnes & Noble • Kobo • Google Play •  Smashwords • Hardcover (Lulu)

Each of the 16 poems in Permanent Ink on Temporary Pages stands alone, but also serves as a piece of a larger narrative. From the death of poetry itself in “At Rest in the Sea” to the lifetime-spanning “The Back of the Room”, the stream-of-consciousness piece “Alone” to the song-turned-poem “Sunday Calls for Cloudy Skies”, and the thematically-related interludes “Letters”, “Pages”, and “Poetries”, Permanent Ink on Temporary Pages tells the story of a narrator struggling to find his place in the world, drifting between tangential universes, and replacing the people around him with fictional characters, all the while writing letters he doesn’t send, poetry scattered to the wind, and pages full of everything he can’t bear the thought of losing.
Amazon • Smashwords • Apple iBooks • Barnes & Noble • Kobo • Google Play 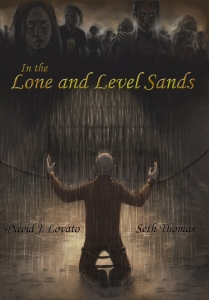 In the Lone and Level Sands

Seven groups of people across America are thrown into a dangerous new world together when people around them begin killing and eating others. Some search for safety, some search for loved ones, and some search for answers about the dangerous, evolving creatures around them, and what they have to do with a man in a prison cell in California. Co-authored with Seth Thomas.
Amazon • Apple iBooks • Barnes & Noble • Kobo • Google Play •  Smashwords • Hardcover (Lulu)

A collection of short stories and poems about zombies. Set in the same universe as In the Lone and Level Sands, though both books can be enjoyed independently. Co-authored with Seth Thomas.
Amazon • Apple iBooks • Barnes & Noble • Kobo • Google Play • Smashwords • Hardcover (Lulu)

Two lost souls learn there’s a way out of the underworld by climbing up one of its chimneys, but learning is the only way to reach them. As Six and Seven search for clues to remind them who they were and how they got here, the chimney draws closer, but knowledge comes with a terrible price. Keeping in line with this dark place’s dark humor, it’s a price Six and Seven might not be able to pay.
Amazon • Apple iBooks • Barnes & Noble • Kobo • Google Play • Smashwords 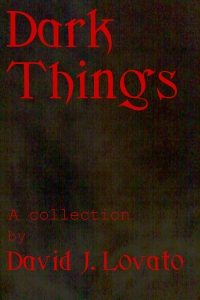 A collection of four short stories. Read the transmissions of an astronaut en route to an alien planet in “The Journal.” Join an FBI agent as he attempts to track a killer using spontaneous human combustion to murder his victims in “The Fire Inside.” Discover things about human nature and paranoia in “A New Place.” Wander the city with a vampire in “Until Morning Comes.”
Amazon • Apple iBooks • Barnes & Noble • Kobo • Google Play • Smashwords

Sully Michaels built himself an underground shelter in preparation of the end of the world. He couldn’t know his shelter was missing the one thing he would need the most.
Apple iBooks • Barnes & Noble • Kobo • Google Play • Smashwords

“Words at the End of the World“, tied for third place in a flash fiction contest hosted by The Write Place at the Write Time, June 2012.