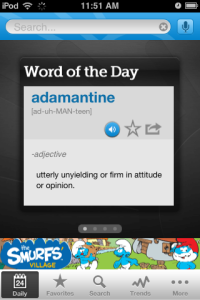 This is a screenshot I took from my iPod. The app is the official dictionary.com app, which I highly recommend. I love the word of the day section they do, and I have a list of favorites that I pulled from there.

However, I rarely get to use them. I tried once, and guess which word was the only one I had test readers complain they didn’t understand?

Sometimes you can say in one word something that might otherwise take more, but that isn’t a good trade off if nobody knows what your one word means. If your reader has to put down your book and pick up a dictionary in order to progress, you’re in trouble. I’m not saying “don’t ever use big or unconventional words” but if you can keep it simple, do so. Sometimes you can make a word clear from the context, and if you can that’s great, but keep in mind sometimes that just adds fluff. Consider:

She might have had a lot of friends had she not been so farouche.

What does “farouche” mean? Ugly? Stinky? Prone to being a big fat jerk? It’s not entirely clear from this sentence alone.

Well, “farouche” basically means “chronically shy”. This is the word that made my test readers raise an eyebrow. The page it was on talked a lot about a character being shy, but the particular paragraph in which it appeared didn’t (save for “farouche” itself). If you’re going to use context as a clue, it might be best to keep the context as close to the word in question as possible. Don’t, however, do something like this:

She might have had a lot of friends had she not been so farouche. She found it hard to talk to people because she was so shy.

The reason I say this is a no-no is because you now have two sentences that basically mean the exact same thing. This isn’t so much context as it is using a sentence to define another sentence, which I’d consider fluff. Incidentally, I’d probably change that sentence to:

She found it hard to talk to people, and she might have had a lot of friends otherwise.

I got rid of “shy” entirely because that’s pretty much what it means to find it hard to talk to people. This sentence doesn’t really show as much as it tells, but it does tell a lot in a few words. For example, since we’re told she might have friends otherwise, we can infer she’s probably a pretty cool person, she’s just shy. It does all of this without making the reader pick up a dictionary.

Don’t use big or unconventional words just for the sake of using them. If you’re a writer, words are the only thing you have to convey what you want to other people, and unless you’re writing only for yourself, it does you no good if those words aren’t understood by anybody.

2 thoughts on “On Big Words”